A start in the 2017 Epsom Oaks is on the cards for the half-sister to Bombora Downs stallion, Dandino (GB).

Having her second race start and the first for the new racing season, 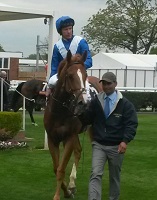 Gracious Diana (GB), won by more than 3 lengths over the 2000m journey at Newbury last Friday; and in front of the Queen no less. Copy and paste the following link to see a replay of her emphatic win:

She is trained by John Gosden out of Newmarket and was ridden by Frankie Dettori. The same combination won the other 3yo fillies race on the card with Shutter Speed, the nominal favourite for the Oaks. Gracious Diana (GB) will probably be set for the Listed Oaks Trial at Newbury on May 20th for her next start.

Gracious Diana (GB) is by the Australian sire and reverse shuttler, Foxwedge (Fastnet Rock x Forest Native (USA)) who has a Group 1 winner in Australia. He had 5 wins from 13 starts, up to 1200m.

The dam, Generous Diana (GB) has had 9 named foals, for 3 winners from 6 to race so far; Dandino (GB) (by Dansili) being the best to date. But it could be that his little sister might be the second stakes winner in the family.